Last year, I wrote about the evolving nature of the writing staff as a possible reason for post-golden-age decline of The Simpsons. While I’d hesitate to argue a causal relationship, the decline in episode ratings did appear to correspond roughly to a change in the writing staff. Nevertheless, there are other potential causes for the downfall, in particular I’m going to focus on something which, to me, sums up the post-golden-age: pointless celebrity cameos.

Not all cameos are bad…

Celebrity appearances aren’t exclusive to the post-golden-age, nor are they necessarily a bad thing. Some of the classic stories focus primarily on a one-off character voiced by a celebrity. A particularly salient example is Lisa’s Substitute, in which Lisa develops a crush on her substitute teacher, Mr Bergstrom, voiced by Dustin Hoffman. The episode is equal parts touching and hilarious, and Hoffman’s performance has been touted as one of The Simpson’s greatest guest appearances. While the episode didn’t spare reference to the actor behind the voice you’d be forgiven for thinking that Mr Bergstrom was, in fact, an authentic Springfieldian. 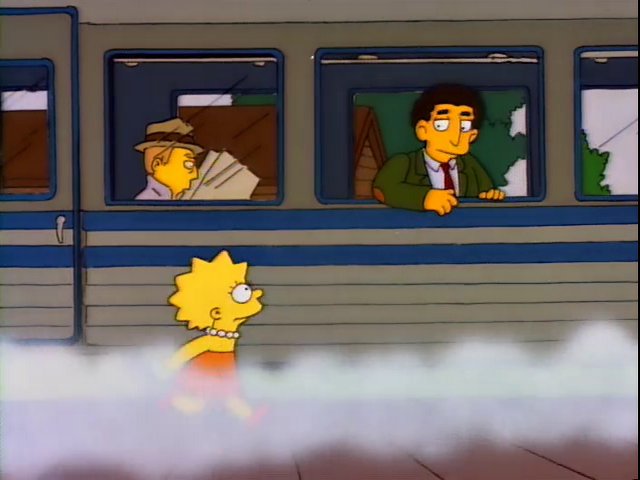 …but some are really bad

Just as a train sped Mr Bergstrom from our lives, so one was used to bring in perhaps the most egregious example of the celebrity cameo: Lady Gaga. At 4.3/10 on IMDb, Lisa Goes Gaga is, by far, the lowest rated episode of the show—significantly lower even than All Singing, All Dancing, the musical clip show episode which I can only assume was some sort of cruel experiment from the writers. The gist of Lisa Goes Gaga is: Lisa feels down; a famous musician shows up in Springfield; and the whole issue is wrapped up with a musical number.

Despite how outlandish this sounds, it’s essentially the plot of Stark Raving Dad, the classic, if currently maligned, episode in which Homer meets a man in a mental asylum who claims to be Michael Jackson. This episode, interestingly, is rated 8.6/10 on IMDb at the time of writing, exactly double that of Lisa Goes Gaga. 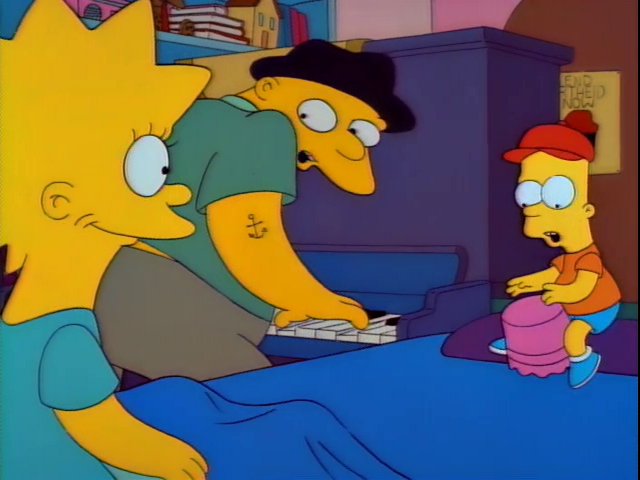 What makes a good cameo?

So, why such love for one episode and not the other? Surely it’s not just that the episode feels like a rehash of an old concept? I’d argue that it comes down to the perceived relationship between the show and the celebrity. In Stark Raving Dad and Lisa’s Substitute the guest stars seemed to be of secondary importance to the plot of the episodes. It’s almost as if the writers began writing an episode about Homer being in a mental asylum and a patient believing he was Michael Jackson was the natural progression of things. In Lisa Goes Gaga, on the other hand, the episode feels more like it exists solely as a vehicle to get Lady Gaga on the show. This contrast is backed up by the fact that Lady Gaga plays herself, while neither Michael Jackson nor Dustin Hoffman technically play themselves in their respective episodes; their names aren’t even listed in the credits.

Who were the main guest stars?

While I’ve only mentioned a few episodes here, I think there’s been a general trend in the show of increasingly present, and increasingly pointless, celebrity cameos. Data on celebrity appearances are available from Wikipedia here and here. We can read them into R using rvest.

However, many of the guest appearances listed aren’t exactly the kind of guests I’m interested in. To see this, we can look at which celebrities appeared in the show most frequently. 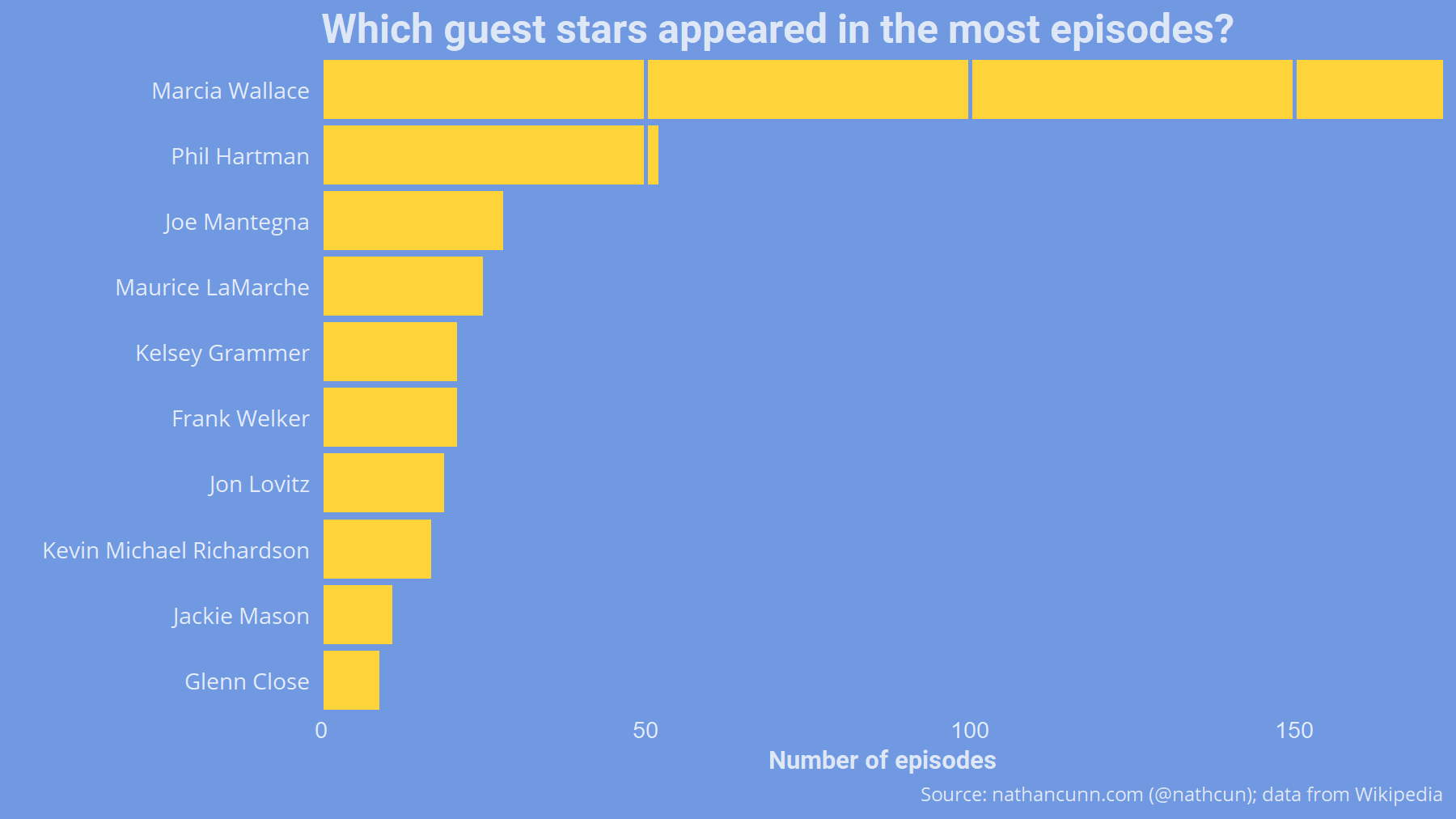 None of these are what I would consider a guest appearance: Marcia Wallace racked up 173 appearances as Mrs Krabappel; Phil Hartman played Lionel Hutz and Troy McClure; and even Glenn Close at the bottom of the top ten made 11 appearances as Mona Simpson. Each of these are characters in their own right and not the kind of pointless cameos that bother me. I’m going filter the data to focus instead on one-off celebrity appearances. 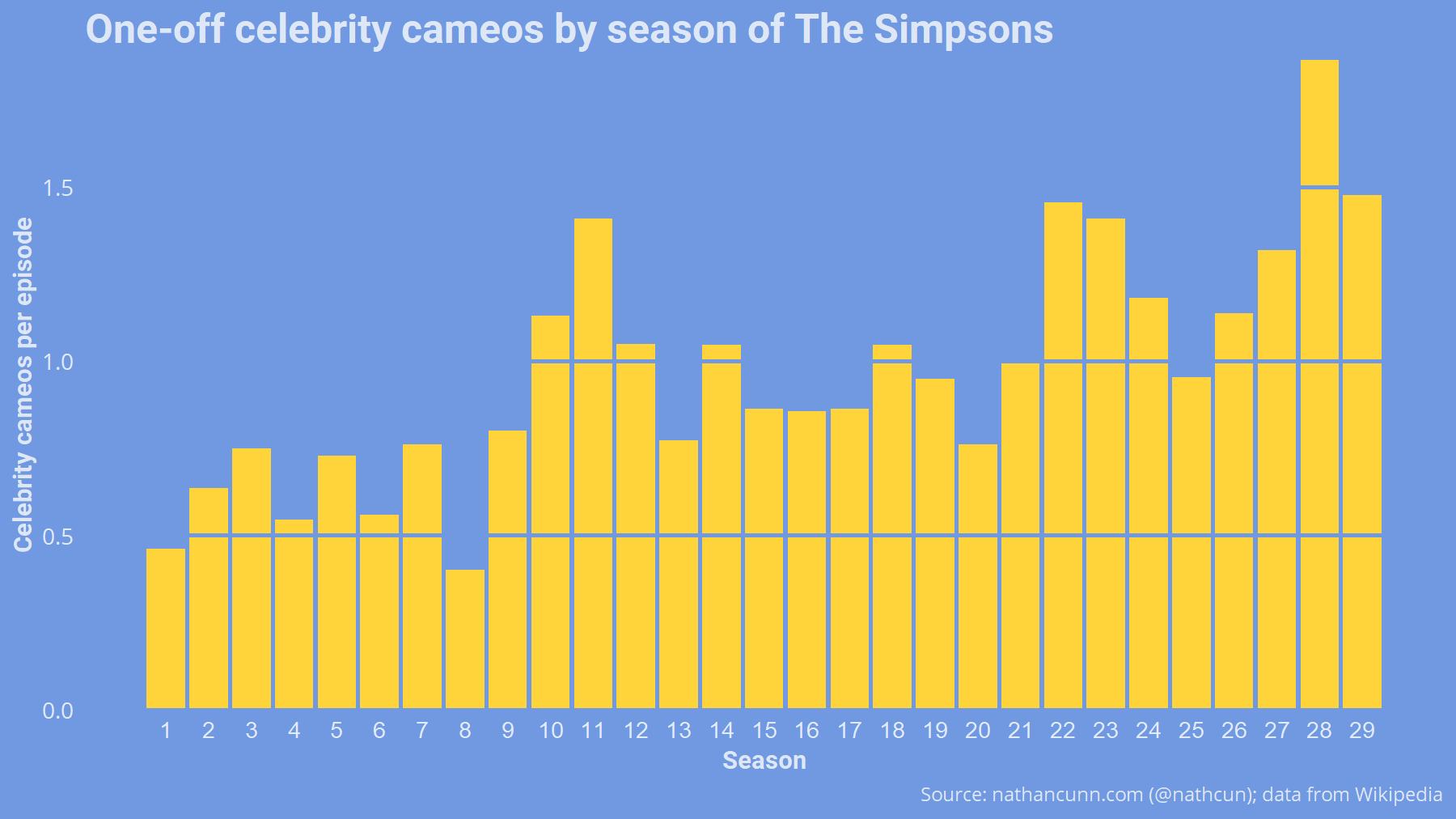 It’s interesting to see the first season to cross the one-celebrity-per-episode threshold is season ten, which I’ve previously found to be the season the golden age ended. Looking more closely at the precise end of the golden age (S10E11 - Wild Barts can’t be broken) there are three guest stars listed: Marcia Wallace as Edna Krabappel, Cyndi Lauper as herself, and Franklin D. Roosevelt as himself (from archives). In constrast, S10E12 - Sunday, Cruddy Sunday, the first post-golden-age episode, has no fewer than eight celebrity cameos, seven of which appear as themselves.

Although the number of celebrity appearances dipped below 1.0 again afterwards, it’s clear to see that there was a tendency for more celebrity cameos post-golden-age than during; the golden age averaged 0.65 celebrities-per-episode while the post-golden-age came in at 1.13.

I should note here the bias in these numbers: it may simply be the case that there are more one-off celebrities in the later seasons because they just haven’t had the chance to reappear on the show yet. While this doesn’t exactly address the problem, the trend is similar if we instead consider celebrities making other numbers of appearances.

As I said already though, celebrity cameos aren’t inherently bad. My issue with them arises when the appearance serves no purpose other than having a celebrity appear on the show. I’m talking about: Lady Gaga; Tony Blair’s appearance to greet The Simpsons at the airport in the UK (why?); Glen Hansard’s appearance to sing a verse of a song because The Simpsons are visiting Ireland; or any of the seven guest appearances from Sunday, Cruddy Sunday. It all comes down to celebrities popping up and playing themselves for no reason.

We can filter these out fairly straightforwardly by looking for cases where the guest star is listed as playing a role containing “self” or “selves”.

The trend is pretty much as before, with the golden age having 0.33 self-appearances per episode, compared with 0.59 post-golden-age. The show never quite broke the one-self-appearance-per-episode threshold, peaking at 0.86 in season 14.

The data used here were sourced from Wikipedia, analysed in R, plotted using ggplot2. The Simpsons images come from Frinkiac.