The prospect of a foldable phone/tablet combo has been causing a stir lately, thanks to Samsung teasing their latest innovation: a phone that unfolds into a tablet. While I don’t particularly fancy one of these devices—not that I could afford one—I can appreciate the technological feats that they are.

However, the phones seem to fly in the face of some notable drivers in phone development recently:

So, what’s the problem? Why not just have both the tablet and the phone 18:9, with minimal bezels? So asked one Reddit user under the discussion on foldable phones yesterday:

This seems to reflect the presumed use case I’ve seen under many comments about these foldable phones: that of a phone which can fold out to allow for watching films/TV. However, the problem with foldable phones is that the aspect ratios of the two screens become inextricably linked. Let’s start with the phone as 18:9, meaning a height of 18 units, a width of 9 units. As the phone will be in portrait while the tablet in landscape, the tablet’s height will also be 18 units, thus giving the tablet a width of 36 units in order to maintain the 18:9 ratio.

So, if we must have 18:9 aspect for both screens, then we’ll have to give over 50% of the front of the phone to bezels.

Or, maybe we could sacrifice having some bezels on the tablet screen? If we have no bezel on the phone screen, then the tablet’s maximum width is twice the phone’s width (plus a little for the folding mechanism). If we’re sticking to our 18:9 guns, the absolute best we can do here is a tablet screen with width 18, and height 9 i.e. literally the phone’s screen but in landscape. Even if we settle for bezels on the tablet side, or even just black bars when watching movies (which are essentially bezels for the user who only wants the larger screen for this use), we won’t be watching on a screen any bigger than what we already have.

Ok, so let’s try instead to build the device from a tablet perspective. I’m continuing to make one basic assumption: the tablet screen is primarily for watching TV/film. I’m sure this won’t be their sole purpose, but this is really just addressed to people who are expecting this use case.

As I mentioned, the most common aspect ratios are 16:9 and 18:9, meaning if we want our tablet screen to maintain that ratio, we’ll have to settle for phone screens roughly 8:9, or 9:9—roughly square shaped. This isn’t out of the question, but would be a deviation from what we expect of our phones. But then, so is folding the damn thing up.

However, many of the tablets on the market today don’t conform to either of these aspect ratios, instead coming with a 4:3 display. Building a foldable phone like this would result in a phone with a 3:2 screen, a 25% decrease in height against 18:9 phones, and a 15% decrease against 16:9 phones and ultimately neither screen is perfectly suited for 16:9 or 18:9 viewing (my assumed reason for the additional screen).

But, what if we go back to wanting our phone and tablet to share an aspect ratio, can we find a suitable ratio such that the added bezels are minimised?

Below I’ve looked at how much of the phone front real estate we’d have to devote to a bezel if both screens are to share an aspect ratio, assuming the tablet side is always bezel-free, and the phone width is exactly half the tablet width:

Clearly there are definitely better choices than 2:1 (or 18:9), with a value between 1 and 2 where the phone and tablet aspect ratios are exactly the same.

I did a quick mock-up of how this might impact the iPhone X, just look at this stubby little thing: 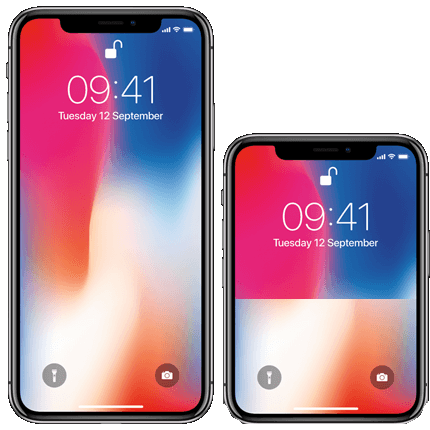 Far be it from me to assume that I know what Samsung’s plans are with regards this technology and I’m certainly not rubbishing the innovation, I just wanted to clarify the basic maths that says these foldable phones just can’t be bezel-free and in the form factor we expect from modern phones/tablets.